This week, André and Tomé worked on replacing some old interaction and mechanisms placeholders with quality, animated and fancy shaded 3D models. Small logic additions and adaptations needed to be made to fit the new art. 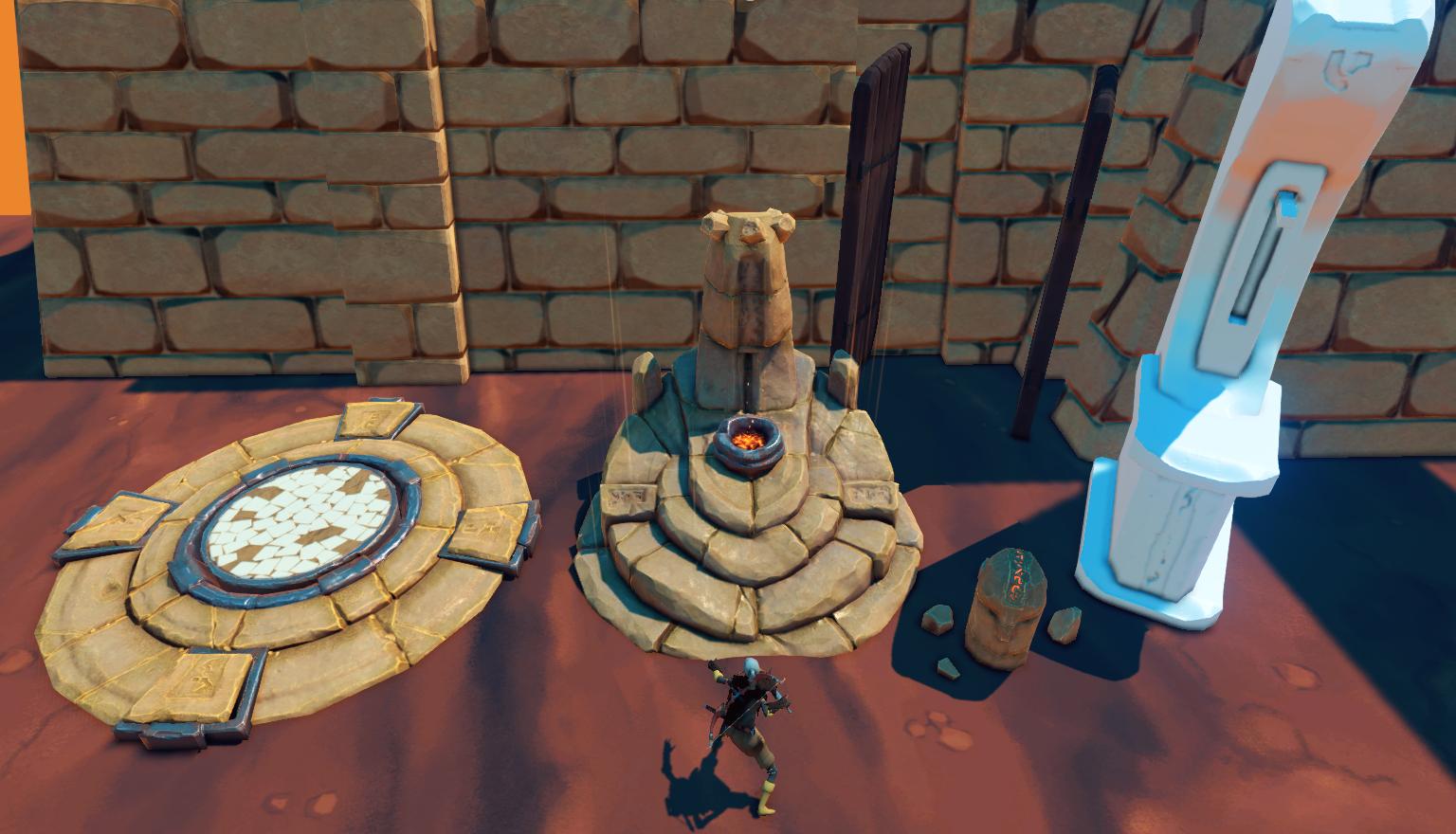 André is also doing some logic changes in order to streamline the localization process, the entire user interface and game text will have support to various languages.
Iuri is also replacing placeholder animations and doing some new ones for the mechanisms mentioned above.

A Journey checkpoint is always important.

Pichel is working hard on finishing the 3d model of the player companion. The next step is rigging it.

This week André added some new mechanics he has been developing for the swamp zone, like quicksand and other traps. He’s also working on fixing the terrain mesh and polishing the level design of that zone. Some bug fixing, code polishing and optimization was done too. Interior zones are more optimized now, the light culling masks were not set correctly but as soon as we fixed it the performance increase was noticeable. Ranged enemies are now more efficient when it comes to killing the player.

We would like to officially welcome Iuri Monteiro, our new animator. We have been using mostly temporary and altered asset store content but now, with a dedicated animator, we can finally define each character’s personality and improve the overall consistency and fluidity. Expect great things in the upcoming months!

Meanwhile, Pichel has been doing the retopo of the Elk model, and he’ll start texturing it soon. Tomé is working on props like the ones you can see below – the Rune Stone (the concept art for it was shown in the previous Blog post) and the Shrine. The latter is meant to work as a checkpoint during the adventure. More illumination iterations were done this week. We encountered some light probe problems and had some lighting misconfigurations, but we are working on it. Most of them are related to our scene streaming system and light baking workflow.

Tomé made some concept tests for a rune stone that the player can interact with. These rune stones are strategically placed near points or areas of interest informing the player about story lore, area information or even gameplay. We are trying to have as little as possible distracting on screen tips during gamplay, these runes and some hints in the re-load screen are given to maintain the immersive experience but the core gameplay will be clutter free.

We are doing some tests for an ancient alphabet for the ancient civilization ruins and runes like in the concept above.

Pichel is finishing the high poly of the player’s companion, he followed the concept posted in the previous devblog but naturally some changes were made to match the 3D perspective.

This week we did some more illumination tests, still not as we would like it to be but it’s getting close! Next week we will update the Amplify Color LUT textures used, our idea is to create an immersive and smooth transition between interiors and exteriors. The use of Volume based blending per-area really helps us quickly test and improve the game look without adding to the work load.

We adopted a tetrahedral light probe placement instead of a simple evenly spaced grid and so far we are getting good results on dynamic objects.

Some issues still to fix but getting closer to the final version.

This week André made a few tweaks to the enemies AI and improved their adaptation to specific situations, in a game as ours AI is a constantly evolving area. For example, an enemy may adopt a defensive AI state depending on its weapon state; if its shield is about to break he will likely try to use it less and evade the player attacks, depending on the enemy it might even strike more. Enemies will also become gradually more offensive the longer they have to defend themselves from player attacks. On the animation side we also apply specific variations that required tuning.

Pichel is working on the new companion 3D model. We had several concept iterations until we arrived at the current result, while he’s doing the body High Poly some small changes might be made to the improvised settle and additional props.

The last concept made.

We are still not 100% sure about the item bags or props attached to the legs.

Next week we will show you the high poly!