Hey there, we’re back!

…the team that went to Unite Berlin 2018, that is! And we have some photos and information to share regarding the event, our booths and all the feedback and love we’ve got from the community!

A panoramic view of the event area, where hundreds of visitors and developers gathered!

The event area was HUGE, with so many people attending that our booths were busy at nearly all times, which was amazing! As we’ve stated in a previous post, we had two booths in the event, one for the Amplify Creations tech, and another one for Decay of Logos which, as some of you already know, uses all of our assets.

In the tech booth, we had Paulo and Ricardo, two of our developers, showcasing our upcoming asset Amplify Impostor Editor, while also providing information regarding the award winning Amplify Shader Editor to all those who were also interested. We were overwhelmed with the excitement of the many attendees and developers who were interested in our new tool, and it was also a pleasure meeting so many people whom we’ve already been in touch with through forums and email!

The Decay of Logos booth, featuring charismatic Hugo from Support and QA!

In the Decay of Logos booth, we had Hugo from Support and QA and the other Ricardo, Producer and Developer Relations at Amplify Creations, spreading the good word about our passion project! We were extremely pleased to see how solid the show build performed, and gathered plenty of useful data that will be invaluable for the polish and balancing phase, that we’re currently on.

Dozens of gamers and developers played the game, and most were kind enough to share their opinion regarding the experience they’ve had!

Thankfully, most enjoyed the visuals, the world and the character design. While many also enjoyed our simple approach to character progression and combat system, it came to our attention that we still need to tweak how the difficulty scales in the show build, and we will definitely be making it more balanced for the upcoming Gamescom event!

All in all, it was a very positive experience and we were delighted to meet so many people throughout the three days of the event and to have gathered so much valuable feedback!

Also, it was also a pleasure to be next to our publisher, Rising Star Games, that was there to showcase Trailblazers, check them out!

See you next friday for another blog post, and thank you for reading!

While our teammates from the tech side of Amplify were busy showcasing our products at Unite Berlin, the rest of us kept working on the game… So we do have some goodies to show!
To start things off, here are some shots from the last area of the game. The Palace is still work in progress, but we feel like we can already offer some sneak peeks. 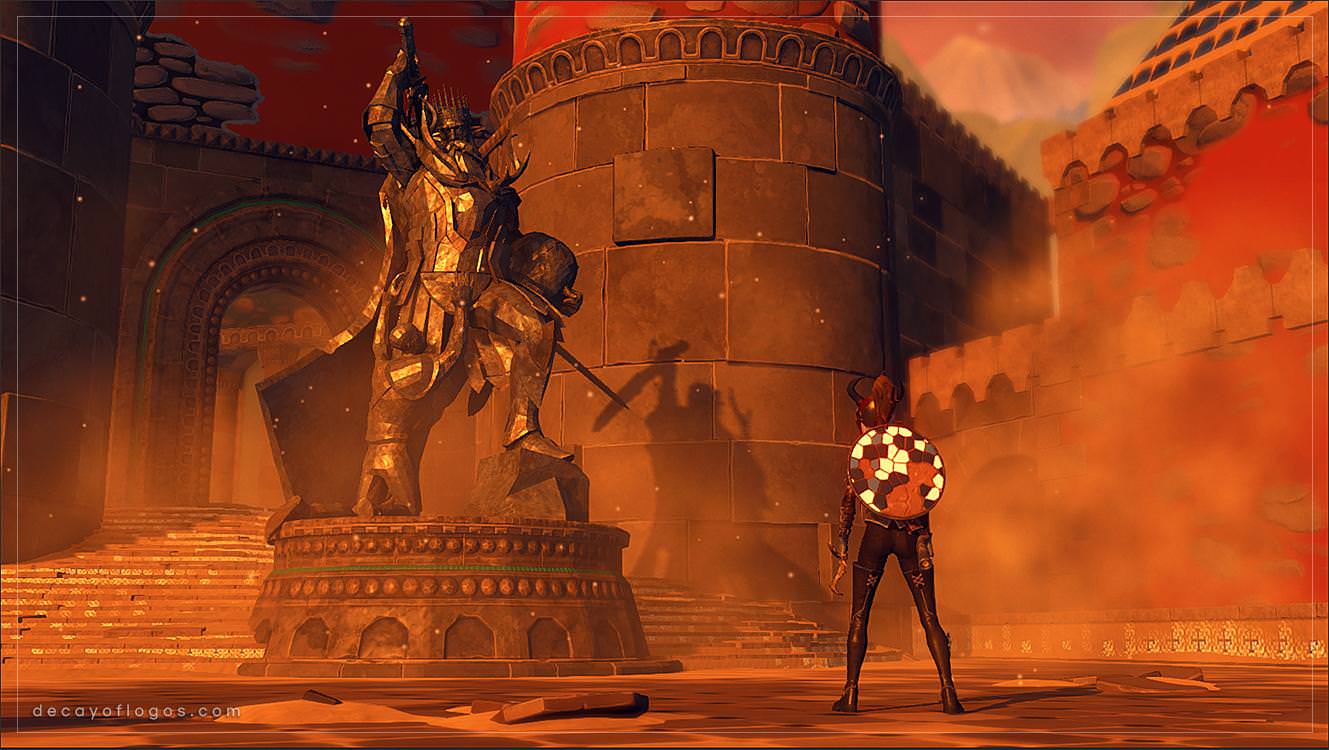 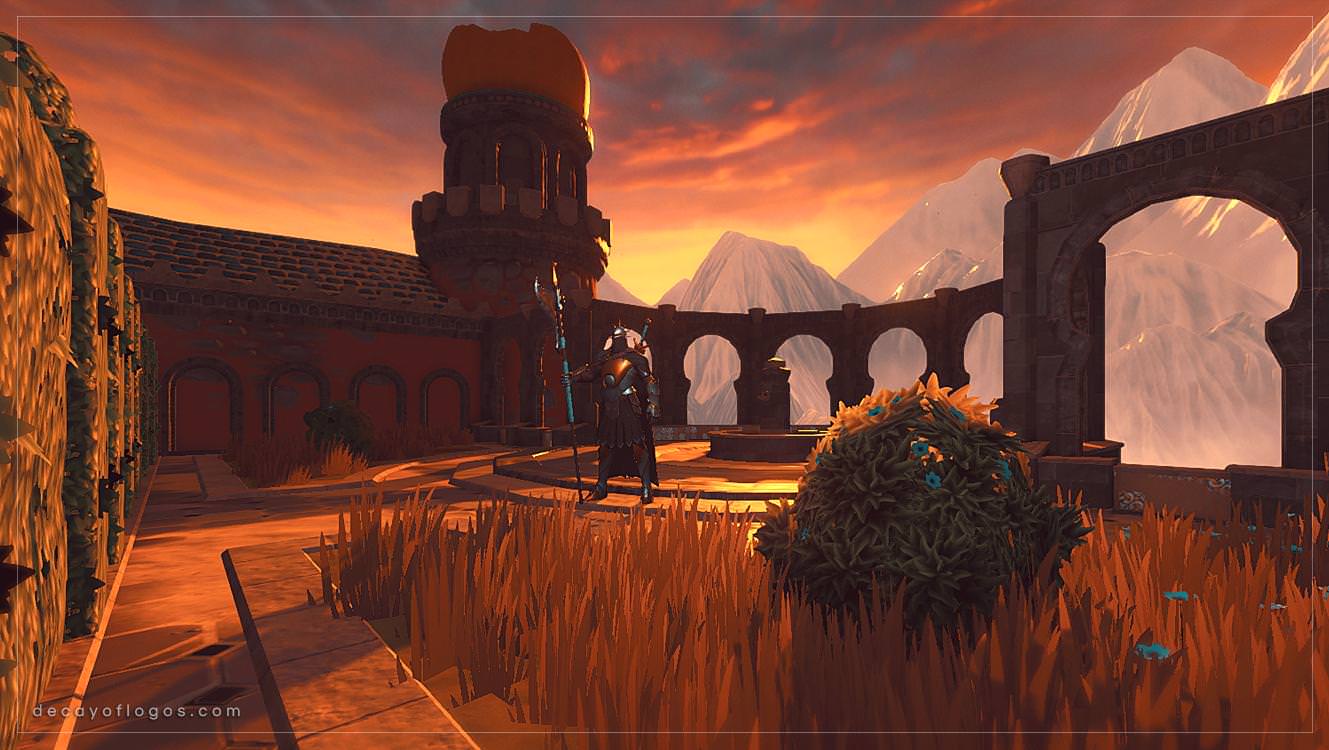 The calm before the storm…

The process of revamping the terrain meshes is pretty much complete. Below you can see a “before/after” comparison – we added more geometry to help with both the silhouette and the vertex painting. 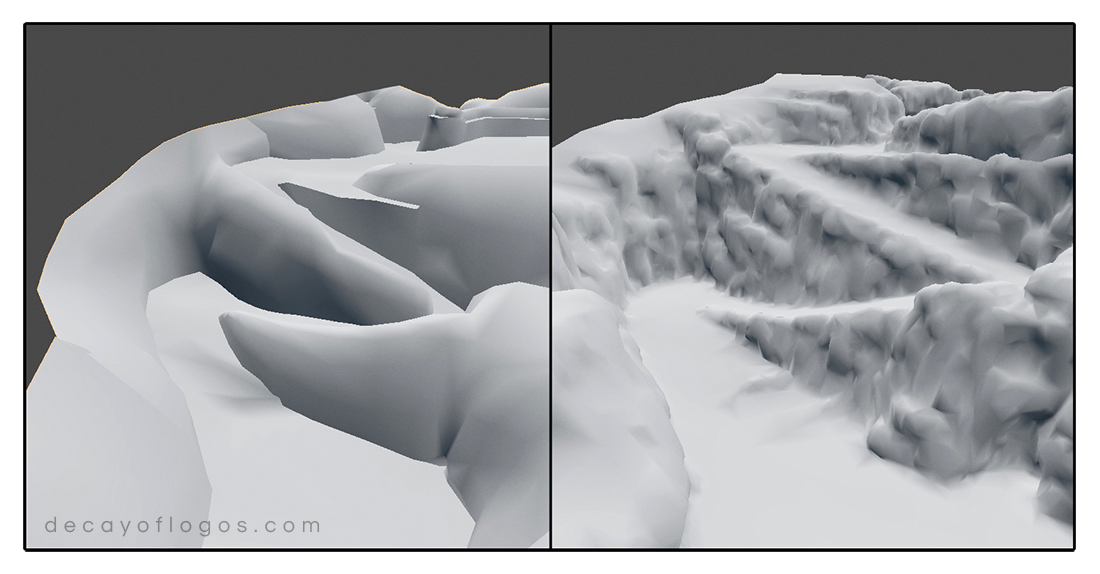 Meanwhile, the last cutscene is finally in game, featuring perfect integration with gameplay. Also, the intro of the game is going very well – it’s a mix of a cutscene and gameplay.

Next week we will recap the Unite Berlin experience, have a great week everyone!

This year we’re going to be present in Unite Berlin with two booths, one for Decay of Logos and another one for our Amplify Creations gamedev tech, so you’ll have a chance of trying out the game AND also to know more about our products! 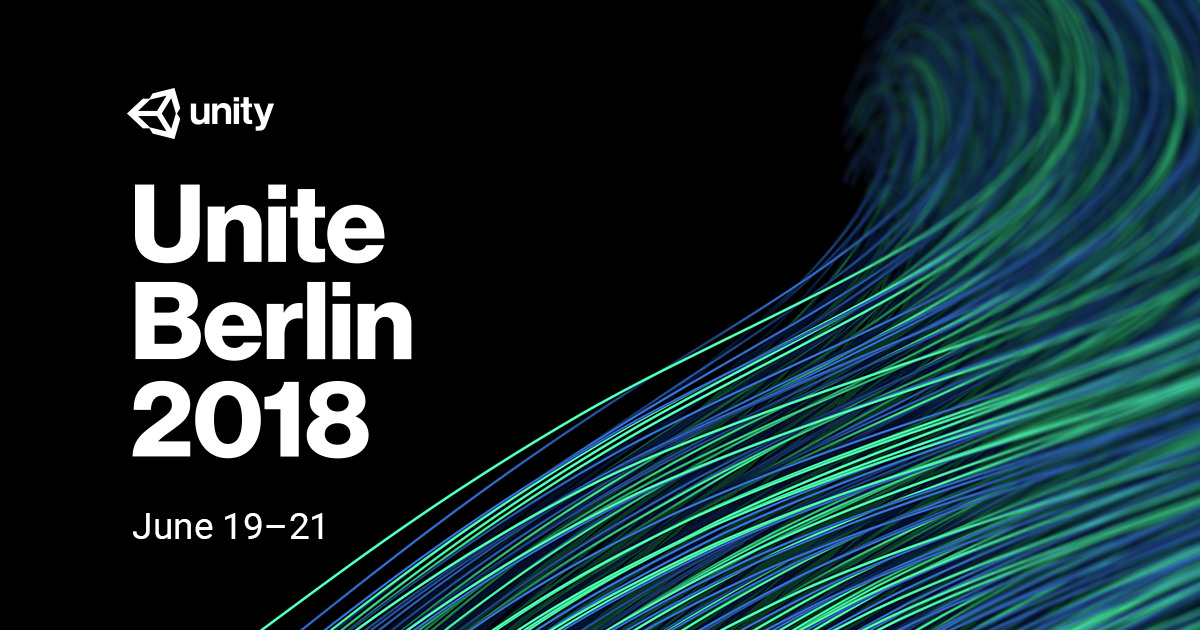 If you have the opportunity, come and visit us to meet the developers and play our game, we will definitely love to meet some more of our community members and fans!

Regarding this week’s progress, we have started working on using our newest asset within our game – Amplify Impostor Editor, which has already been submitted and is going to hit the Asset Store VERY soon.

We’re going to be using it in great scale in objects like bushes, trees and other small props, in order to achieve a considerable performance boost without compromising the user experience – you won’t even know they’re there!

In addition, this is also extremely powerful for further optimizing our console ports, so we’re very excited to test the results.

We’ve also continued polishing textures and animations, doing Q&A runs and fixing bugs, so every day that passes the game matures into our vision!

To those who are visiting us at Unite Berlin, looking forward to meeting you soon!

Have a great week everyone!

We’re here for another weekly devblog post, this time with some fresh, new screenshots to share, and some additional information regarding our progress! 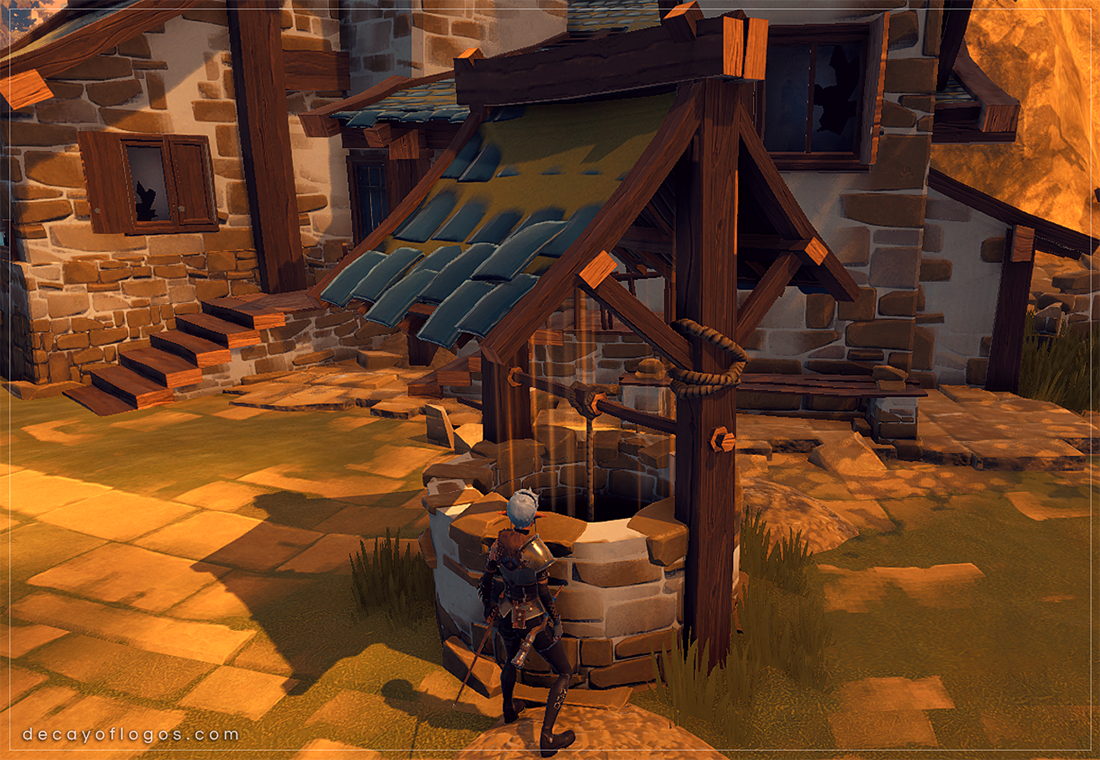 We’ve finished adding some additional content and logic to the village, such as the bottomless well, that you can see in the screenshot above, which allows you to stash all the goods you find without any limits.

Perfect for anyone who, like us, loves to hoard stuff! 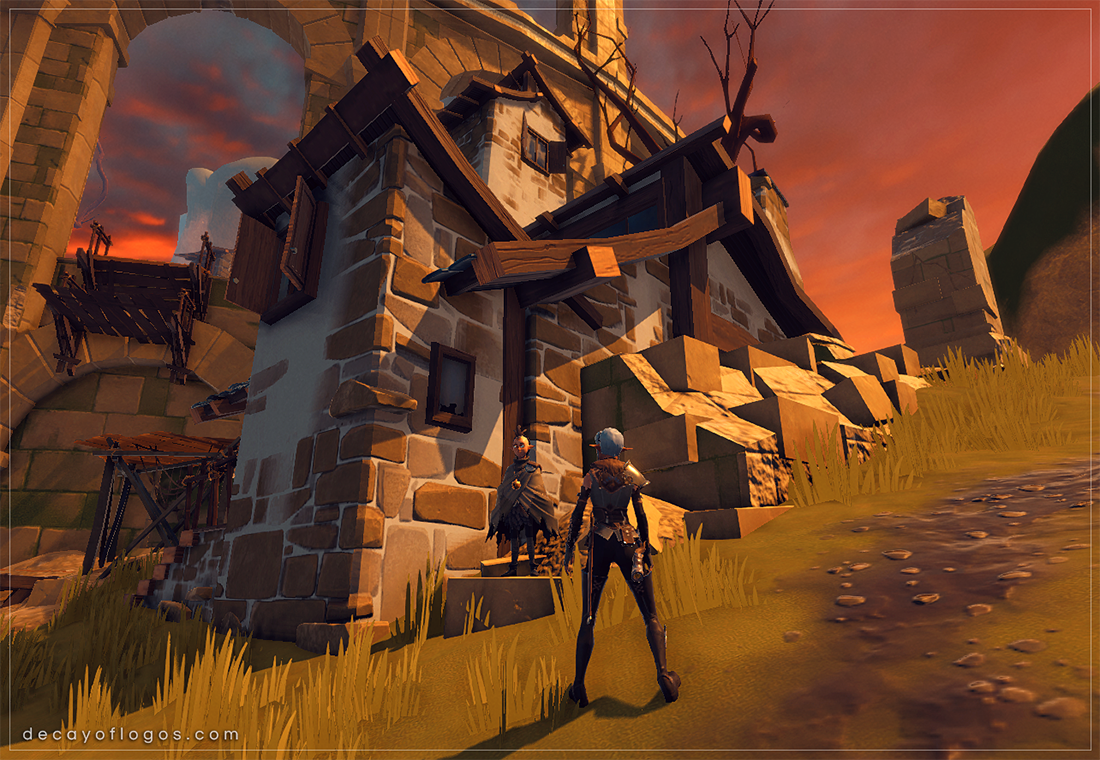 Look how cozy he is now!

The NPCs’ positioning has been adjusted, and they will show up as you meet and interact with them during your adventure, and the village’s mood will be changing as you progress in your quest for the truth.

We’ve also continued to work on polishing the game, adding some further detail to the characters’ textures and animations while also reworking the terrain for certain areas, as we’ve mentioned in a previous post.

And now for something completely different!

We’re sharing a sample of the music that’s being worked on for the village, which will also change dynamically throughout the game, let us know how you feel about it, all feedback is welcome!

Next week, we’ll do another extensive bug fixing run with all the issues and nitpicks we’ve found during out daily QA sessions, which have been both fun and gratifying as we see the game shape up to our expectations!

We’re back from the Euro Gamer – Portugal Summer Fest, and we brought something back with us!

We won our first award!

And even though we’re really happy and humbled to have won the Best Portuguese Game award, what really made our day was both the warm reception and all the wonderful feedback we’ve got from all the gamers that stopped by our booth! Our show build had some further polish and tweaks since the Pax East show, and we were really pleased with the results.

Here’s a panoramic picture from the Arena where the event took place:

Are you not entertained!?

And another one, this time from our booth:

The booth where magic happened!

Regarding this week’s development progress, the final cutscene has been completed but, unfortunately, we can’t really share any footage as it would… you know, spoil the ending! The item descriptions that were missing are also being written, taking place of all the placeholder text that we had, and the old ones are being overhauled as well.

Soon we’ll be tackling the new combat animations, resulting into more animated gifs and gameplay that we’ll definitely share with all of you, so stay tuned!